When we launched our first open call in March of 2019 we hadn’t guessed yet how fast the first year of Blockchers would fly and the great deal of experiences that made us richer.

So the first round of the project came to an end and we can declare proudly that 12 amazing and very professional teams  were selected successfully last May.

The end of the first round was crowned by a major final event which was a final pitch competition too when the 8 teams had to present what was achieved during the previous 4 and half months of the use case implementation phase.

The major Blockchers event and the award ceremony were held in Frankfurt on the 9th of March 2020, as a section of the Crypto Assets Conference.

Unfortunately our plan was prevented by the COVID-19:  the event which would originally have lasted for 2 days, was reduced by 1 day. Furthermore one of the 8 teams could not attend the event in person only online via a video call.

Despite the difficulties the final event took place successfully thanks to the great organization of the Frankfurt School Blockchain Center. All the teams performed very well on the final pitch competition, we could make sure that the teams did a great and professional job during the implementation.

Based on the performance of the final pitch competition, which was judged by the 3-member jury and the results of the implementation phase evaluated by Zabala and Innomine, the following two teams has been awarded the extra prizes. 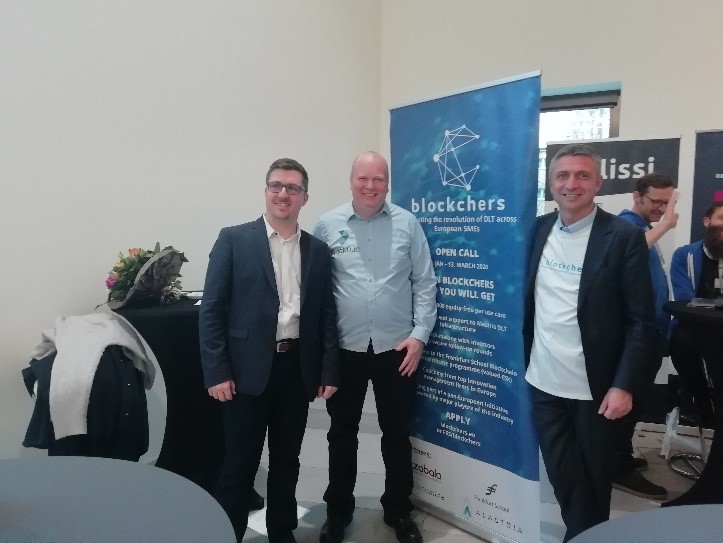 We are so pleased that we could meet these 8 fantastic teams thanks to the Blockchers project and were able to help them in achieving success.

But we are excited to start the new round of Blockchers with the same enthusiasm in the middle of May 2020 when we will start the work with 18 new Blockchers. The 2nd open call of the project was closed on the 13th March 2020. we received 111 finalized proposals via F6S.com from 27 different countries. The evaluation process of the proposals is ongoing and we can’t wait to introduce the new 18 Blockchers! Soon!

blockchers2020-04-17T11:15:14+01:00
We use cookies to ensure that we give you the best experience on our website. If you continue to use this site we will assume that you are happy with it.OkCookies policy